7 Benefits of a Roth IRA 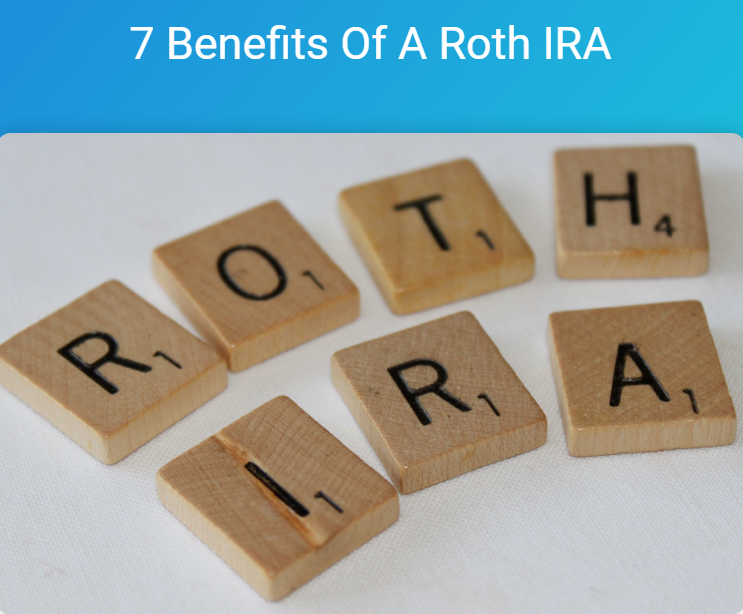 While many investors have heard of Roth IRAs, they don’t know much about them or how to use them. A ProPublica story was published in June about Peter Thiel’s $5 billion Roth account. Some even call the proposed rules requiring taxpayers to withdraw all but $20 million from their IRA accounts the “Peter Thiel” rules.

What is a Roth IRA and how does it differ from a traditional IRA?

Like traditional RIAs, Roth IRAs provide investors with a tax-deferred way to save money for retirement. Both accounts allow invested funds to grow tax-free. The primary difference between the two types of accounts relates to how contributions and distributions are taxed.

You can generally withdraw money contributed to a Roth IRA at any time. Why? Because you already paid tax on that contribution. If you’re more than 59 ½, you won’t pay taxes on any investment gains in the account either. Keep in mind that a five-year rule applies to Roth IRAs. This requires you to wait five years after your first contribution to a Roth IRA to withdraw your earnings tax-free. If you complete Roth conversions, a separate five-year rule applies to each conversion.

Unless you believe in Modern Monetary Theory (MMT), you probably expect tax rates to increase in the future. (In short, MMT argues that if a country issues its own currency, it will never “run out of money” the way a person or business can. Why? Because it can print more money.

At the same time, absent any changes to current tax law, tax rates will increase in 2026 unless Congress takes action before then. The lower tax rates that took effect in 2018 expire at the end of 2025. After that, we go back to 2017 rates.

Benefits of a Roth IRA

For example, the premiums retirees are paying in 2021 are based on their 2019 income. If your income exceeds $88,000 (single) or $176,000 (married), you will pay more for Medicare than someone who makes less. There are another four brackets above this initial one. Once again, Roth withdrawals do not increase your income for purposes of determining your Medicare premiums.

Note that because Medicare premiums are based on your income from two years ago, you can be assessed a higher premium when you first retire. You can file an appeal if you believe your IRMAA is incorrect for a qualifying reason. As discussed in more detail here, work stoppage is one of the seven qualifying life-changing events that can allow for a redetermination of your Part B premium.

This feature makes Roth IRAs an attractive option for those that are not sure if they can leave the money they contribute to their account in place until they reach retirement.

The SECURE Act made this benefit of Roth IRAs more significant. Under prior law, RMDs from an inherited IRA were based on the beneficiary’s life expectancy. The SECURE Act limits the withdrawal period for Inherited IRAs to 10 years. This limit applies to both Inherited traditional IRAs and inherited Roth IRAs. (Note that an exception exists for spouses and certain other beneficiaries.)

Some Changes to Roth IRA Rules Could Be Coming

Proposed tax legislation is only proposed legislation. It doesn’t mean anything until it passes into law. When I worked for Deloitte as a tax professional, I got used to seeing the same routine every year. New tax legislation would be proposed. The “think tank” members of the firm would write about what the legislation could mean and what steps you could take. Then the legislation didn’t pass. Or if it did pass, it would be different in some respects than what was originally proposed. The lesson I learned was to follow the path of proposed legislation. But be careful about acting on it before it was signed into law.

As noted above, the tax legislation proposed in September was targeted towards some elements of retirement savings accounts:

To learn about some other tax provisions that would impact financial plans, please check the beginning of this blog.

If you have questions about Roth IRAs or would like some help determining if they might be right for you, please schedule a free call. I would be happy to discuss them. To do so, you can either send me an email at philweiss@apprisewealth.com or schedule a free call using this link.

I’ll be back next week with “Apprise’s Five Favorite Reads of the Week.”

Have a great week.

Our practice continues to benefit from referrals from our clients and friends. Thank you for your trust and confidence.

We hope you find the above post valuable. If you would like to talk to us about financial topics including your investments, creating a financial plan, saving for college, or saving for retirement, please complete our contact form. We will be in touch. You can also schedule a call or a virtual meeting via Zoom.

Add Your Listing to Financial Advisors.com Sign Up With Us Here: